If you are a movie lover who always pursues great viewing experience, you must have collected multitudes of Blu-ray movies. Do you want to backup these Blu-rays or convert them into various formats to playback on your portable devices? Then DVDFab would be your best choice. DVDFab is a full-featured Blu-ray solution toolkit which contains the modules of Blu-ray copy, Blu-ray Ripper and Blu-ray Creator.

With DVDFab Blu-ray copy, you can copy any BD 50 3D to BD 25 3D in the original format, copy 3D Blu-ray to 2D Blu-ray, and convert Blu-ray 3D to Blu-ray SBS 3D; with DVDFab Blu-ray Ripper, you can rip any 2D/3D Blu-ray to popular 2D or 3D video, even including H.265 and 4K videos; with DVDFab Blu-ray Creator, you can burn any video to Blu-ray easily and quickly. For playing these Blu-rays or converted videos, you can use DVDFab Media Player, which can play back all the video formats you have, including the HEVC (H.265), UHD (Ultra High Definition) and 4K videos, as well as Blu-ray discs/ISO files/folders, even unprotected 4K UHD Blu-ray ISO files and folders, with native navigation menu support.

How to burn video to Blu-ray? Here are some articles for Windows or Mac users to learn how to create Blu-ray from videos in various formats. 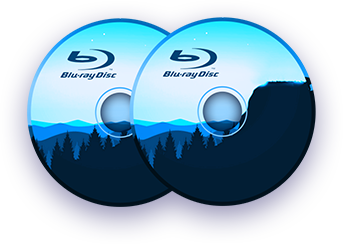 Featuring the most advanced Blu-ray copy technologies, DVDFab Blu-ray Copy allows you to make premium backup copies to your legally purchased Blu-ray movie/TV Show discs at home, for non-commercial use. With 5 versatile backup modes catering various demands, you can copy your Blu-rays in the way that fits your situation best.

Do you want to find a high performance Blu-ray player that can bring you a wonderful audio-visual experience? Here you can find some Blu-ray players with some powerful features and also some methods for you to play Blu-rays on your Windows or Mac without any hassle.